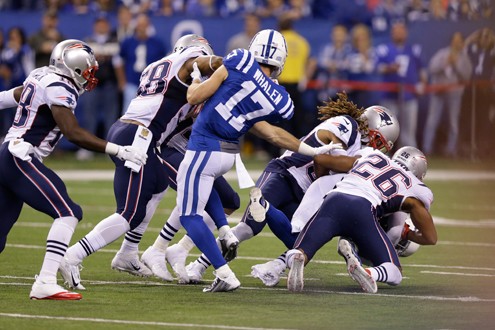 I’m not sure what we did to deserve this, but the NFL schedule makers stuck us with this game on this December Monday night. Both teams are decent , true, but you can’t help but feel like there were better matchups to put in this slot. Either way… it’s not like we’re not going to watch Monday Night Football.

Andrew Luck. He’s the key to everything for Indy. They’re going to need to work hard to keep him upright facing the Jets aggressive defensive line. The Jets secondary boasts some scary names, like Darrelle Revis, but given proper time in the pocket, Luck should have plenty of success finding holes in that aging secondary. It’s going to fall on his shoulders though because the Colts’ running game just isn’t good enough to get the job done.

The Jets have a few options for beating the Colts, but turning it into a shootout isn’t a good one. They won’t have the firepower to outdo Luck, instead, they should opt for keeping it out of his hands. A balanced attack with Matt Forte and forcing Indy to run the ball will put the Jets in a great spot for a late-season W. Getting Indianapolis into third and long situations and teeing off on Luck when he drops back will seal the deal.